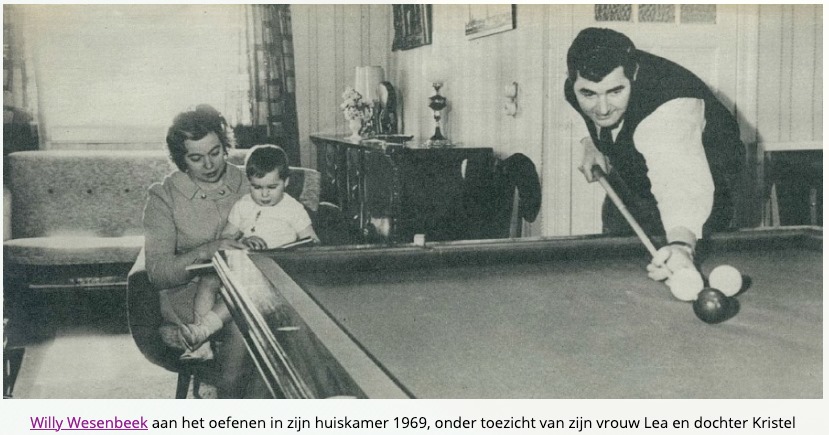 Willy Wesenbeek passes away at 83. The world of billiards loses another icon: Belgian balkline specialist Willy Wesenbeek has passed away today. He was 83 years old.

Later in life, he switched to the more popular 3-cushion discipline and in 1993 almost succeeded in joining the BWA stable when he made the final four in the qualification tournament of Spa. His best 3-cushion match ever was a 42 in 13 inning performance (3.231), also in 1993, in the Belgian “excellence” division. I’ve been Willy’s teammate in the Belgian league for a handful of seasons, and remember him fondly. He was a warrior with the heart of a lion, but he was also a gentle man with empathy. We liked to make fun of his very slow and defensive play, but that never bothered him. “Close the door, Bert” (deurke toe) is what he used to say to me before every match. It meant: don’t leave anything for your opponent. The picture shows Willy, second from the left, in the beautiful room of De Deken billiard club in Merksem near Antwerp.
Quite possibly, Willy will be remembered most for his teaching. Over the decades, he must have had hundreds of pupils and he had a real talent for sharing billiard knowledge.